About the Cover Photo 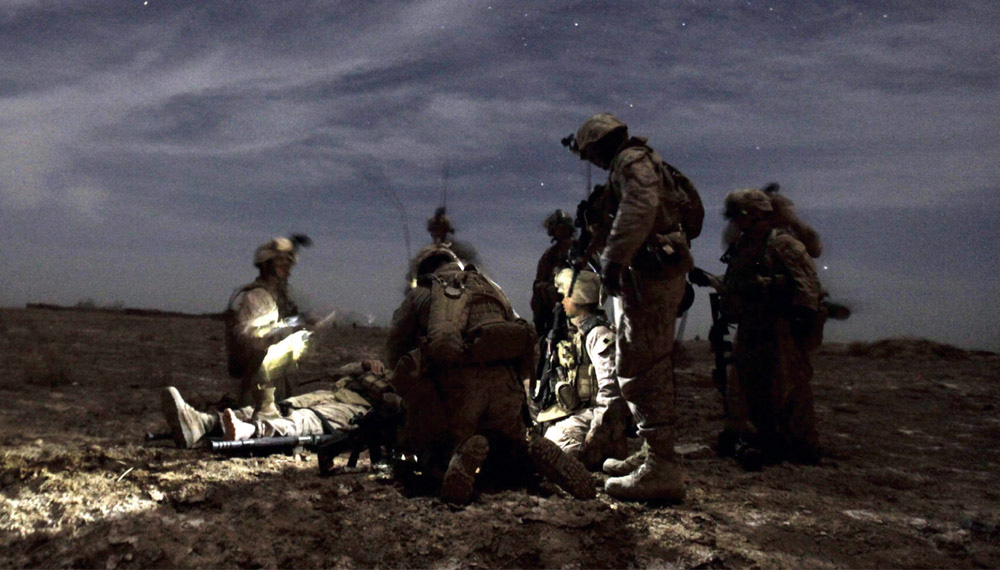 It was nearly 11 p.m. on the tenth day of the Marine operation to secure Marja, and Patrick Baz, a French-Lebanese photographer for Agence France Presse, finally had a chance to rest. The Marines he was accompanying, from Charlie Company of the First Battalion of the Third Marine Regiment, were sitting in the courtyard of a mud-walled home after an arduous day of hunting insurgents in Trek Nawa, a lawless desert enclave just northeast of Marja. While the Marines sought out places to bed down for the night, Baz thought about the long journey home to Cyprus that he would commence the following day.

And then, a brilliant flash illuminated the slivered-moon night. A thunderous boom shattered the calm.
One of the Marine trucks that had been following the patrol all day, ferrying supplies and communications gear, had struck a sixty-pound bomb buried in the dirt road.

Debris rained down on the Marines in the courtyard. Sergeants yelled at their lance corporals to don their gear, pick up their weapons, and charge toward the truck to aid those inside. Baz, who was already wearing his flak vest and carrying his cameras, was torn about what to do.

I’m in a minefield, he thought. It’s pitch black. Am I going to run behind them? I don’t know where I’m stepping.

But staying put seemed equally perilous. He feared the Marines would forget about him and he would be kidnapped by Taliban sympathizers.

It’s Afghan roulette. Losing your leg is better than getting your head chopped off.

Baz, then 47, approached the truck. Had it been a Humvee, it would have been pulverized. But it was a hulking MRAP—a mine resistant, ambush protected vehicle—with a V-shaped hull to deflect the force of roadside bomb explosions. The truck looked banged up, but it remained upright.

Two of the occupants had been injured. One of them, Lance Corporal Kris Mottley, the turret gunner, was knocked out. He was placed on a litter and carried a short distance away. His comrades performed first aid and summoned a medical evacuation helicopter.

As Mottley’s fellow Marines stood and knelt next to him, their headlamps illuminating his body, Baz approached. He couldn’t use a flash, so he got creative. He upped the ISO setting on his Canon EOS 5D Mark II to 3,200. There wasn’t enough light to focus, so he set his 16-35mm zoom to the widest possible angle, and he opened the lens’s aperture to its maximum diameter. Then he placed the camera on his flak vest, took a deep breath and exposed the image for two seconds.

He got off about a half-dozen frames before the helicopter arrived, kicking up dust that made additional shots impossible.

When he got back to the company’s base the following morning, he decided this was his best image and he uploaded it with a satellite phone to the AFP wire.

The photo did not get published widely at the time because the newswires were filled with far more graphic images from inside Marja. But cover designer Darren Haggar spotted it last year in the Getty/AFP archive and thought it would be the ideal image for the cover.

“It was such a beautiful image,” Haggar said. “There was a story in there that felt right for the book.”

I agree. The photo captures the human cost of the war on the deserts of southern Afghanistan with grace, tenderness, and intensity. Baz’s use of light echoes Francisco Goya’s “The Third of May 1808,” which dramatizes Spanish resistance to Napoleon’s armies during the Peninsular War. It also reminds me of the way the Dutch master Johannes Vermeer harnessed targeted light.

Mottley spent a few days in a field hospital where he recovered enough to return to duty. He is still with the Marines, stationed in Hawaii.

Designed and built by John Niedermeyer